I. Josiah
Josiah—just eight years old when he becomes king—is now a young adult, 26-years-old, when he decides it’s time to repair the temple. As we read chapters 22 and 23, we realize that the Temple has simply fallen into disuse—it has been ignored and almost abandoned. This happens as a part of the disaster has befallen the kingdom David and Solomon, the division that Solomon’s son, Rehoboam, brings about. Today’s reading relates something that happened in the Southern Kingdom of that division, Judah.

Josiah decides—for some undeclared reason—to have the Temple repaired. He orders stone workers and carpenters to renovate. In the process of the renovations, a book is found…or, more likely, a scroll— ‘the Book of the Law.’ The priests bring the book, and when Josiah hears what the book says, he is convicted…and determines that he needs to lead Judah in a new direction.

II. Grandmother’s Stories
I guess I was a young teenager when I first heard the stories. My parents were missionaries, so we spent much our lives outside the US—far away from our family, from aunts, uncles, and grandparents. This was a time long before cell phones and computers. Letters would often take weeks. As a result, I didn’t really know my grandparents that well, but one summer on furlough in the US, I got to spend some weeks with my Grandmother Herrin—and I was forever changed.

Perhaps I had never had a reason to ask those sorts of questions, so when the answers came, my identity was shaped like never before. One afternoon, I began to ask Grandmother about her childhood, growing up in the mountains of north Georgia. Soon, she began to tell me the story of our family’s migration…beginning back in the 1740’s in Scotland. The story took us from Scotland to Pennsylvania down to North Carolina and finally into Georgia.

Suddenly, I had a past, a history, an identity! I went from being simply ‘Jon Herrin’ to being ‘one of the Herrins’—one in a long line of people who had traveled and lived through two-and-a-half centuries. My interest grew, and I went on compile the family history by pulling together all of the written pieces and oral pieces. An afternoon with my grandmother changed everything.

III. The Book of the Law
We have a sense that something similar to my family epiphany occurred that afternoon when Josiah heard the reading of Torah—the stories of Creation, the Fall, the call of Abraham, the sojourn in Egypt, and the journey of the people with Moses back to the land of Abraham. When the Book of the Law was found and read to the young king, he suddenly found his identity and that of his entire people. He also found a code to live by, a standard—a bar set a bit higher than he be handed by his family. In an instant, the king gained an understanding of who he was and how he was to live…and he realized he had not been living the life he should have been. He realized that he had ignorantly been living ‘other.’ Not only he, but he and his people had not been living as God had called them to live.

Josiah calls his people together—everyone—and shares with them what has been discovered, and it changes the way the people see themselves, understand themselves.

At first, we wonder how this could have happened—how could someone misplace ‘the Book of the Law’? But, when we realize that Josiah is living some 350-400 years after the construction of the Temple, when we think about all that has transpired with the division of the kingdom and the parade of different kings—some, or many, corrupt—before him, we realize that even things as precious as this book could have been lost, misplaced, laid aside.

IV. Again…for the First Time.
Of course, the book is not really new for the people of Judah—it has been around since the days of leaving Egypt and crossing the wilderness on the way to the Promised Land. This book had once guided Moses, David, and Solomon. But it’s new for this generation.

I recall when I was a youngster that Kellogg’s aired a commercial for their Corn Flakes cereal that urged viewers to “try them again…for the first time.” Well, the fact that I recall the silly commercial some forty years later certainly speaks to the effectiveness of the advertising program. And, I have often applied the concept to my own life—getting back to things important but long forgotten. Judah is called back to ‘the Book of the Law’…something they as a nation, as a people, were hearing again, for the first time.

V. Bringing it All Together
In our own age of information, we are easily side-tracked by all of the materials available to us. Our phones and devices—though they often contain a Bible app—too often take us to other places and that Bible app gets lost in a sense. Too often we Christians have been enticed to read all of the many books written by other Christians about how to live better, how to be disciples, how to think…and we have forgotten to read ‘the Book’ itself.

In Jesus’ time, the Sadducees—some of the supposedly very committed students of ‘the Book of the Law’—were reprimanded by Jesus because “you do not know the Scriptures or the power of God” (Matt. 22:29). If some of the very experts in these things didn’t know the Scriptures, isn’t it possible we might be missing something as well?

Today’s passage urges us to return to the Book, to reclaim the Book, to re-read the Book. We may have copies lying about the house…unopened. Why not commit this day to reading a Psalm each day, or a chapter of Proverbs each evening? If you have heard the story of Jesus but have never read his story, perhaps reading a chapter a day from the Gospel of Mark or Matthew is where to begin.

We may not shred our clothes like Josiah—after all, we’re not reading only ‘the Book of the Law’—Torah; we’re reading what has become a book of grace that includes the old and the new, the story of Israel and the story of the Church. We may discover that we have not been living into our true identity as children of God. We may discover that we have neglected important parts of this life of faith. We may realize that we, too, ‘do not know the Scriptures or the power of God.’ If nothing else, we may suddenly find our real identity as a part of God’s people…we may find our place in the Story…the story of God’s people that we’ve been following since September. If even that happens, our lives will be forever changed. 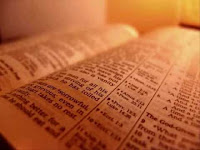 Feel free to leave your own insights, questions, and words of encouragement below--perhaps they'll help us all as we strive to faithfully present this passage to our congregations. Blessings...

Posted by Wilderness Wonderings at 6:08 AM